As Uber continues to infuriates taxi drivers in Quebec, and Teo Taxi files for bankruptcy, two entrepreneurs in their twenties are fine-tuning a different business model for a ride hailing app based on the social economy: Eva. An improved and socially responsible version of Uber

Dardan Isufi and Raphael Gaudrault are 22 and 23 years old and both still studying, but they are also full-time entrepreneurs and co-founders of a young startup: Eva.

It all began in the Fall of 2017 as Uber was once again making the headlines in Montreal. The two friends started thinking of the ride hailing economy.

“The problem with Uber is not the concept of ride sharing but its implementation.”

Uber creates a precarious environment for drivers and an economy that does not invest benefits in the local economy (with 25% of revenues collected by the company).

From the old capitalism to the new sharing economy

Eva has completely shifted the economic model and offers a decentralized solidarity cooperative. Drivers and passengers are part of a community based on the redistribution of wealth (a great interview with Crypto Tim is available here)

When it comes to revenues, the driver members earn 85% of the total ride fare. While the rest does not go to any shareholder’s pocket but instead, 10% is used to provide funds to the cooperative and 4% goes for ecosystem treasury, and the rest goes to the Eva foundation (technical maintenance, communications).

“The idea is to maximize the profit for the driver members who often have to pay for the car, the maintenance, a driver’s license, fines, and energy costs.”

This is made possible by blockchain: based on the decentralization of data, this technology avoids the cost of stocking data on servers while offering more security and confidentiality. Everything is explained in this White Paper.

A taste for risk and for impact-driven values

Both students are invested in impact-driven organizations and deeply believe in values of cooperation, respect, and social justice. Dardan is studying Political Science and handles operations, i.e. legal constraints and authorizations. Raphael is studying Computer Software Engineering and handles the tech part of the work, i.e. blockchain. Both have a deep interest in solving problems and getting out of their comfort zone.

“A crazy idea will become realistic when it is embraced as a team.”

The co-founders have surrounded themselves with a team of technical ninjas and communications aurors who are getting ready to make their crazy idea a reality. As for the general public it can become part of the coop by joining as a rider, as a driver or as a support member.

A harsh market with high barriers to entry

Building sustainable innovations is not easy, especially in a market dominated by a giant like Uber. Some players have learned this lesson the harsh way: less than three years ago, Teo Taxi had brought a fleet of electric cars to the taxi industry in Montreal (we have written about them here) but it announced the shut down of its operations on 29 January 2019.

“Teo Taxi was a strong player in the transport industry. It provided a green alternative and had made the idea of electric transportation realistic”.

Hopefully, Montrealers will continue to embrace socially responsible innovations when it comes to ride hailing, and Eva will provide a highly differentiated alternative to Uber that can attract a community that believes in impact-driven initiatives.

Eva is more than a ride-sharing application, Eva is a movement empowering people with automation and inclusion.

After receiving legal authorization from the Quebec Ministry of Transportation, the Eva App should be launched in Montreal by the end of February 2019. Download the app and find out more about it.

You must have heard of bitcoins and “The Internet of Money” before but do you really know what they are, and how useful they can be to you, in your daily life? Did you know that in fact, they could be a new revolutionary way to enhance freedom of speech in parts of the world? We have met with Jean Amiouny who told us all about these new financial technologies and his brand new startup, Shake.

A taste for technology, finance and … entrepreneurship

Jean was born and raised in Montreal but his interest for digital innovations makes him a real citizen of the world. After graduating from McGill in Civil Engineering, he decided to go to Dubai for a few years and quickly got attracted by the startup way of life. He started a project in the payment industry, White Payment. “What was really stimulating in the project was that banks are not so innovative in the Middle East so there was a real market for digital payments”, explains Jean. In the end, although Jean came back to Montreal, he had caught the bug of entrepreneurship… 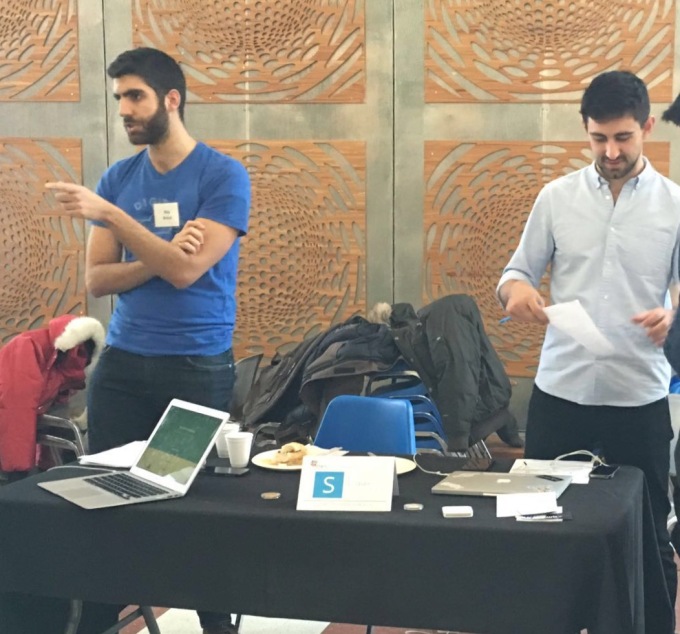 As he sat last autumn with Roy Breidi who would become his partner, they started brainstorming on finance, digital products, cryptocurrencies and bitcoins… the main question that held their attention was “How can we use bitcoins to buy our daily life products?” What makes bitcoins so interesting and promising is that digital currencies are so much more usable on a day to day basis: using the Tap & Pay system, you only need the app on your phone to pay for your coffee.

“A bitcoin account is very similar to an email address in its process: just as you can send emails from anywhere, you can send bitcoins from different “wallets” to anyone”

Another important factor of simplicity is that developing bitcoin services does not require to integrate financial processes of each country (SEPA in Europe, ACH in the United States): payment becomes universal. Is all this new technology free? Not really but it does not cost you more than the more traditional one: when you use your Shake account with Starbucks or Provigo, for example, the merchant pays an interchange fee to Visa that makes its way back to Shake.

To find out more about this part, check this very insightful article by Code Love.

Shake, a startup for a young, digitally aware and international public

Indeed, Shake’s public comes from all parts of the world and the system support more than 20 currencies. In developed and financially mature countries, more and more people are more interested in technology and innovation and believe that eventually, most financial services will integrate bitcoins and “blockchain” services. Another important public for Shake lived in emerging countries – in Africa, in South America – where governments have a higher control on financial services and where bitcoins can allow anyone to have financial assets that can be moved.

A promising future for the digitalization of our daily lives

Bitcoin payments are already well developed in some parts of the world, especially in Europe. The continent acts as a pioneer for digital innovations: did you know that Estonia had made all government services digital? You can actually become an e-resident of the country in a few clicks and each citizen has an ID card allowing to vote and to complete annual tax reports online.

As far as Shake is concerned, the team started communicating on the service, they were at McGill Career Fair last week. They are also currently testing the virtual card in different countries (you can check a quick video of the first tap & pay move in Brazil) to improve its process and you can join the list and test their product by writing them on alpha@shakepay.co.