3D printing is at the core of innovation and opens the possibilities for the hardware industry. You can now print pretty much everything, from the little piece that would allow to stabilize your living room table, to a new shinbone for surgery. Two French engineers have developed a new material, made of recycled plastic, to make these more sustainable.

Today, Nefilatek’s Kickstarter campaign is almost over but the project started a year ago, as a school project. Bastien was studying at Polytechnic and was convinced that developing recycled 3D printing filaments could be realistic. He was able to win grants from Fondation Arbour and enter Universite de Montreal and Polytechnique JAB incubator.

A few months after, Angel joined the adventure with a background in Physical Engineering. After working in a biomedical lab, he wanted to find a meaningful project that allowed him to contribute to society.

Recycling makes the cost of raw material much cheaper

Thanks to research and development innovations, pretty much all plastics in the industry can be recycled: old electronics, home appliances are thrown in recycling factories and transformed into plastic pallets.

Nefilatek has been able to develop different filaments: HIPS (High Impact Polystyrene) is good for the general public and for startups while PC (Polycarbonate) is more resistant and used in biomedical labs. In addition, the team builds spools that are also recycled, reusable and very light to avoid wasting empty stools.

Closing the loop of the circular economy

For now, the team at Nefilatek uses plastics from sorting centers which is not 100% clean and needs to be decontaminated but the aim is to find raw plastics and make their own mixture.

We want to be able to collect used filaments from 3D printed prototypes and objects and recycle it to develop Nefilatek filaments. Then, we would be truly closing the loop.

3D printing could be the new DIY trend

Over the past years, it is mostly known by geeks and tinkers, but 3D printing is a fun and useful hobby … and it is not that expensive! Did you know that you could buy a 3D printer for $350? And you can use it for making a missing piece of furniture, instead of buying a new one, or to make a new flower vase, deco pieces or toys for your children, or anything you want! Most models are open source so you can find them on websites such as Thingiverse.

It would be great to build a community of individual clients and democratize circular economy, show people that they can make everything by themselves.

If you’re interested in testing 3D printing and doing it in a sustainable manner with Nefilatek filaments, you can contribute to their Kickstartercampaign until 22 April 2019!

When we think of innovation we often think of new apps to facilitate our life, we think of smart objects, artificial intelligence, new service providers but there is a myriad of smart objects being created in Montreal, and now you have a physical address to find them – Neoshop.

Once upon a time in France

Yes, the idea came from France, with the first Neoshop opening in Laval in 2013 but through an initiative of the dynamic Quartier de l’Innovation, it successfully expanded in North America with Montreal as a HQ. The idea is to offer to consumers the innovations created by startups and thus, to support these startups when marketing their innovations.

A business accelerator for innovative startups in Quebec

The Montreal boutique opened almost a year ago and we met with Hugo Paquin, its manager, last week during Startupfest 2017.

We want to progressively become the reference for innovative products in Quebec. Some of these startups only have an online presence but they could reach many customers by using a physical sales point.

Neoshop acts like a physical address for startups but it is much more than this – the idea is also to help startups fine-tune their marketing strategy. This is where Hugo can add a true value. With over seven years of professional experience in marketing and communication, having worked in prestigious organizations such as KPMG and CGI, he knows how to share new ideas with startups to leverage their growth strategies.

During Startupfest 2017, Neoshop had a pop-up kiosk where they were displaying some of the popular objects they offer – Naak energy bars, OCNI Factory seasoning mix, Kinesix sportswear, Nex Band a smart bracelet, Bubbles products… and Hugo met many new startups to expand the Neoshop catalogue in the near future.

Eventually, the goal is to create an international network where European products will be offered in Montreal and Quebec products will be advertised in Neoshops in France or Ireland. These innovation boutiques are mostly targeted at “early adopters” and Millennials, who are already sensitive to innovation but being a physical retailer also allows to target pretty much anyone.

For now, Neoshop does not have a permanent physical address but it is hosted by Quartier de l’Innovation which already brings visibility and awareness. In the middle of engineering works in Downtown Montreal, Neoshop surely serves as a bridge between innovation and the consumer market.

Canada is famous worldwide for its extremely cold winters so it is natural that a very promising Montreal startup has found out a way to leverage innovative tools to make people warmer. We met Jonathan Albrecht from Kinesix Sports during Startupfest 2017 edition. He is currently finalizing what could be the perfect smart object for urban Montrealers next winter.

The concept of a heating jacket

Have you ever heard of heating jackets? It is mainly used by amateurs of extreme sports (skiing or hiking). But Kinesix is taking a step further and working on making this a smart object, giving users the possibility to control temperature from their smartphones.

Basically, heath is conducted through carbon elements to twelve heath zones. A manual mode is available but the app can also determine the optimal temperature. The fabric is similar to Gortex so it does not absorb water or perspiration for an optimal comfort. And the price remains competitive compared to Canadian premium winter jackets (it is $300 on pre-sale and eventually the final retail price will be $699).

Combining a passion for sports and biomechanics

John has always been into sports. After living in France during his teenage years, he came back to Canada and decided to study in kinesiology and in biomechanics. He worked in a sports store for 5 years where he clearly identified a need for simplifying winter sports clothing. His dream was to combine these two passions and work in the product development division for Nike.

His passion for entrepreneurship eventually led him to think of starting his own business – Kinesix, offering innovative high-end products for athletic usage. In this context, launching a smart heating jacket was the next logical move:

“In sports apparel, innovation has to come from smart objects. Brands like Nike tend to innovate their equipment to produce better fabric but not to create smart connected objects” 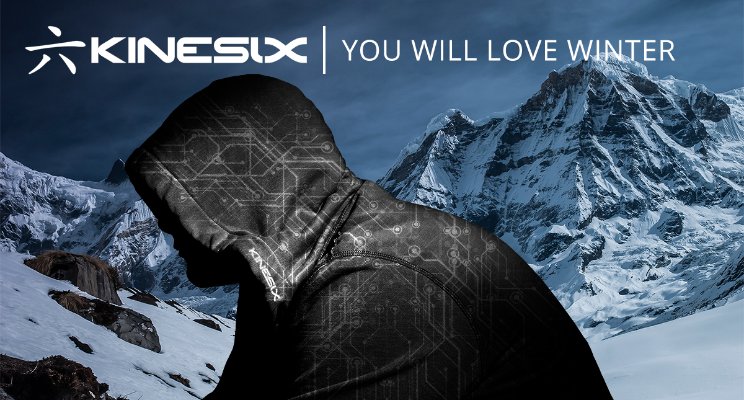 Kinesix is working in partnership with the Centre de transfert technologique in Saint-Hyacinthe to integrate heating elements and develop the an expertise for mass production. The electronic elements are produced in partnership with DFX Tech and the heating parts with Memtronik. John has already raised interest from potential buyers in France and Switzerland:

It is important to offer a Canadian product especially when selling the product in Europe. It provides credibility.

For now, the team is finalizing technical elements, working on the rechargeable battery but the heating jacket has already raised a lot of interest (especially through an article on La Presse) and a Kickstart campaign will soon be launched. Pre-purchase requests come from various customers – senior citizen, students or athletes – which confirms the multiple usages of such a smart object.